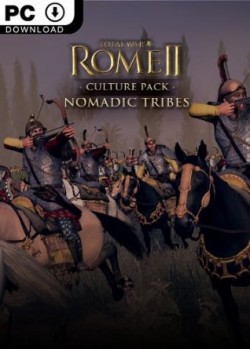 About the DLC:
The Nomadic Tribes Culture Pack adds a new playable culture comprising three new playable Factions to Total War: ROME II, for use in Single or Multiplayer Campaign modes and Custom and Multiplayer battles.

The Nomadic Tribes Culture Pack enables ROME II players to take on the ancient world as the ruthless Roxolani, the independent Massagetae and the proud Royal Scythians. Accomplished raiders and legendary horsemen, the Nomadic Tribes are poised to sweep from the steppes and strike at the soft, sedentary targets of more established empires.

Defined by their independence, their excellence on horseback and their ability to swiftly assemble large armies, The Nomadic Tribes bring an entirely new cultural flavour to ROME II.

New Playable Factions – The Roxolani, Massagetae and Royal Scythians each offer a unique new way to experience the campaign, with their own rosters of powerful military units, distinct traits and play styles.

The Roxolani gain wealth from their skills as migrant traders, and as committed conquerors, fight harder when in enemy territory; the Royal Scythians are experts with the bow, and enjoy increased wealth through their high degree of craftsmanship; and the fierce independence of the Massagetae leads them to fight harder when defending their territory, while their expertise in animal husbandry means increased income from livestock.

New Cultural Traits – All Nomadic Tribes benefit from extra recruitment slots in their home provinces, enabling them to raise armies swiftly. They have also refined raiding and looting to an art-form, and their forces gather greater wealth through raiding than other factions.

New Cultural Objectives – The Nomadic Tribes have their own new set of military, economic and cultural victory conditions, as well as sharing a unique set of bonus objectives drawn from the history of The Steppes. Additionally, each faction will have to contend with its unique events and dilemmas.

New Military Tradition – The armies of the Nomadic Tribes can benefit from a unique new military tradition: Nomadic Horde. This tradition increases the movement range of the army, increases its unit morale when fighting in enemy territory and, commensurate with the tribes’ heavy use of horse and rider, reduces the recruitment costs of cavalry units.

Saka Noble Armoured Lancers
Few can withstand a charge by these skilled and heavily-armoured noblemen.

Saka Cataphracts
Armoured from head to toe, these heavy cavalry are capable of flattening anyone in their path.

Sarmatian Riders
Born to the saddle, these spear-wielding riders like to get up-close and brutal with their enemies.

Sarmatian Horsemen
With the right man in the saddle, a horse and a spear make for a deadly combination.

Scythian Royal Skirmishers
The enemies of Scythia rightly fear these natural riders’ javelins – and the swift swords which follow.

The Nomadic Tribes are fiercely independent and make lives for themselves under canvas. You’ll see this reflected in their settlements and cities on the campaign map, which favour tents and yurts over brick and stone structures. In addition, their building chains are unique among the factions of ROME II; they reflect the nomadic lifestyle and bring bonuses which play to the nomads’ strengths as shepherds, horsemen and archers.

Food:
Given their itinerant lifestyle, the Nomadic Tribes’ food supply – and to a greater degree than other factions, their income – begins with animal herding. As such, their food-production building chain begins with Sheep Pens, which advances to the Weaver, then the Yurt Maker.
A second Camp chain replaces farms in the standard building chains, and offers increasing benefits to the income that livestock bring. The Camp chain begins with the Nomad Camp, which upgrades to the Wagon Camp, then the Royal Camp.

Research
The wisest of the tribe gather with the soothsayers to devise ways of improving tribal society. The Nomadic Tribes’ Research chain consists of the Enaree Tent, which upgrades to the Enaree Conclave, and ultimately the Royal Enarees, and brings boosts to the rate at which new technologies are developed.

Stables
The people of the Nomadic Tribes make great use of horses for trade, travel and war, and breed their stock on the wide-open steppe. The Stables chain begins with Wild Horses, which upgrades to Large Herd and finally to the Royal Herd.

Religion
The tribes of the great steppe pray to their own gods, and these are reflected in the unique groves, shrines and sanctuaries they build. The building chains relating to each god bring bonuses to many aspects of nomadic development, such as research, livestock income, agent levels and public order. Certain chains also bring bonuses to two of the nomads’ key military units: melee cavalry and horse archers.

In addition, the apex of the religious chain brings access to a unique new wonder: The Kurgan Field. This giant burial mound boosts the cultural influence of the tribe, and brings a considerable boost to income through livestock.

The Royal Scythians
The Royal Scythians are the social and tribal elite of nomad society, their skills in war matched only by their love of gold and ostentatious personal finery. Any who mistake this golden luxury for decadence usually die on the points of Royal Scythian spears well before they can change their misguided opinion.

The Massagetae
The Massagetae are a confederation of tribes, and fierce steppe warriors all. Cyrus the Great, the founder of the Achaemenid Empire, fell in battle against them while leading a Persian army deep into the steppes. They have remained a dangerous people ever since, feared and respected by their neighbours.

The Roxolani
Every man has his day in the sun, and the same is true of entire tribes. As the Scythians grow weak, the Roxolani are ready to take up the sword in their place. From astride their hardy steppe horses, they are right to see the whole of the ‘civilized’ world as being filled with riches. What glorious battles await? 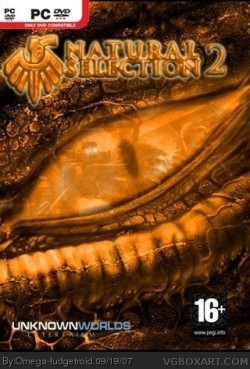 Natural Selection 2 pits alien against human in an action-packed struggle for survival. Wield devastating weaponry as a Frontiesman marine, or become the xenomorph as a deadly. Kharaa life-form.

Natural Selection 2 is a First Person Shooter and Real Time Stategy game rolled into one! Each team, alien and human, has a Commander. The Commander looks down on the battlefield and issues orders, places structures, collects resources, researches technology, and deploys abilities.

Here are some gameplay examples: A human Commander could drop health packs and ammunition to a trapped marine squad, and deploy sentry guns to help them defend their position. Or an alien Commander could grow a new Hive to spread infestation throughout newly captured territory, allowing more alien eggs to spawn...

Aliens players choose to evolve into one of five lifeforms: The fast, fearsome Skulk can run on walls and deliver massive damage with is jaws. Lerks fly and deploy gasses to support their teammates in battle. Gorges heal other lifeforms and build tunnels, hydra turrets, walls, and other tactical structures. Fades blink in and out of battle, picking off marines with giant scythes. Finally, the giant Onos is so massive and so tough, that even entire marine squads can't take it down.

When attacking on foot doesn't cut it, marines can construct hulking Exosuits wielding miniguns and railguns, and equip jetpacks for high speed assaults on alien Hives.

Natural Selection 2 comes with all the tools we used to make the game. All game code is open source. That means you can create, and play, an endless variety of mods. Publish, share, and download mods from the Steam Workshop, and automatically download mods when you join modded games.

Super Meat Boy is a tough as nails platformer where you play as an animated cube of meat who's trying to save his girlfriend (who happens to be made of bandages) from an evil fetus in a jar wearing a tux. Our meaty hero will leap from walls, over seas of buzz saws, through crumbling caves and pools of old needles. Sacrificing his own well being to save his damsel in distress. Super Meat Boy brings the old school difficulty of classic NES titles like Mega Man 2, Ghost and Goblins and Super Mario Bros. 2 (The Japanese one) and stream lines them down to the essential no BS straight forward twitch reflex platforming. Ramping up in difficulty from hard to soul crushing SMB will drag Meat boy though haunted hospitals, salt factories and even hell itself. And if 300+ single player levels weren't enough SMB also throws in epic boss fights, a level editor and tons of unlock able secrets, warp zones and hidden characters. Story mode, featuring over 300 levels spanning 5+ chapters Play as a Head Crab! (Steam Exclusive) 33 legitimate Achievements Warp zones that will warp you into other games Over 16 unlockable able and playable characters from popular indie titles such as, Minecraft, Bit.Trip, VVVVVV and Machinarium Epic Boss fights Full Level Editor and Level Portal (January 2011) A story so moving you will cry yourself to sleep for the rest of your life 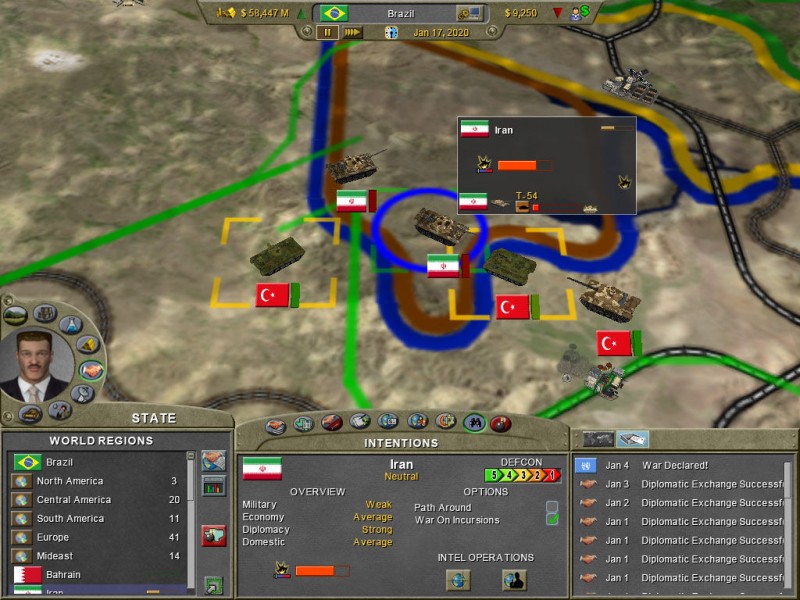 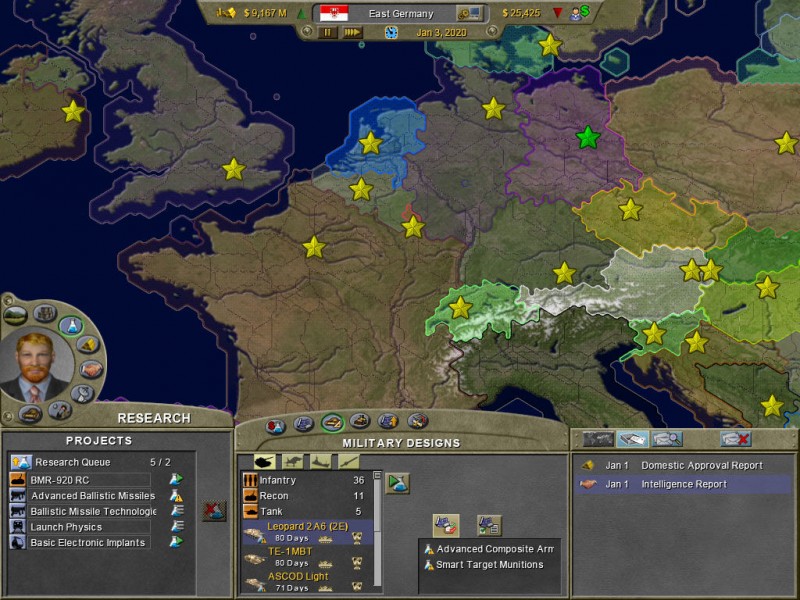 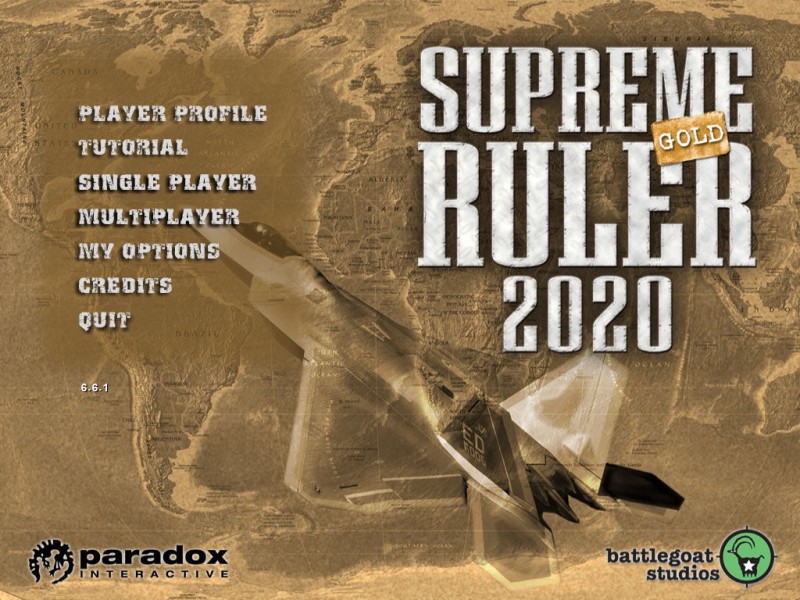 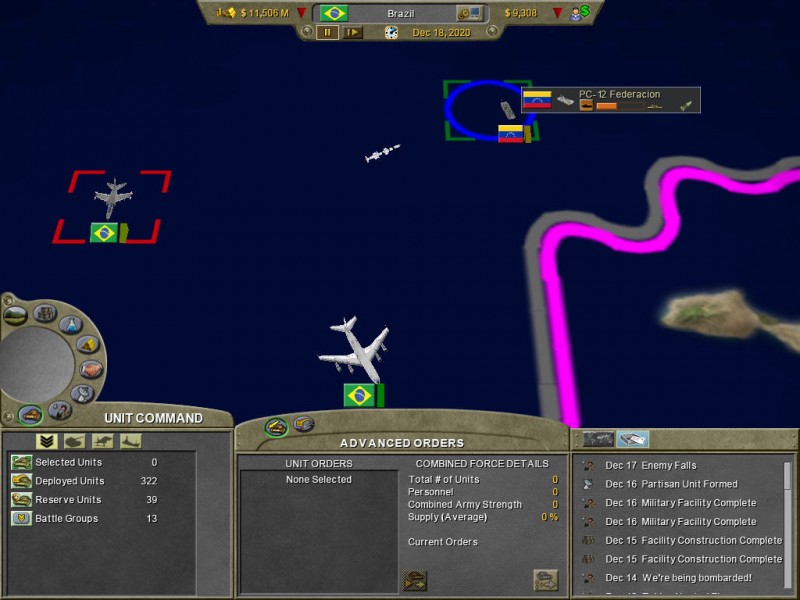 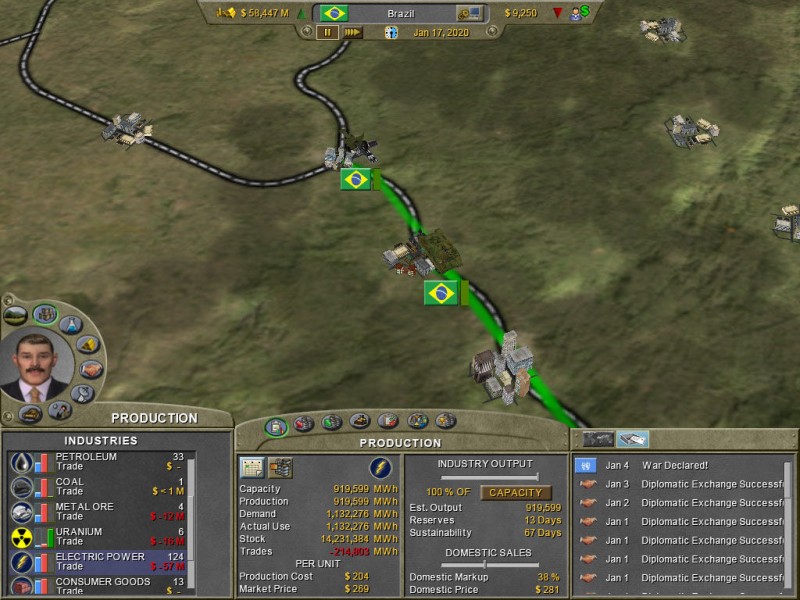 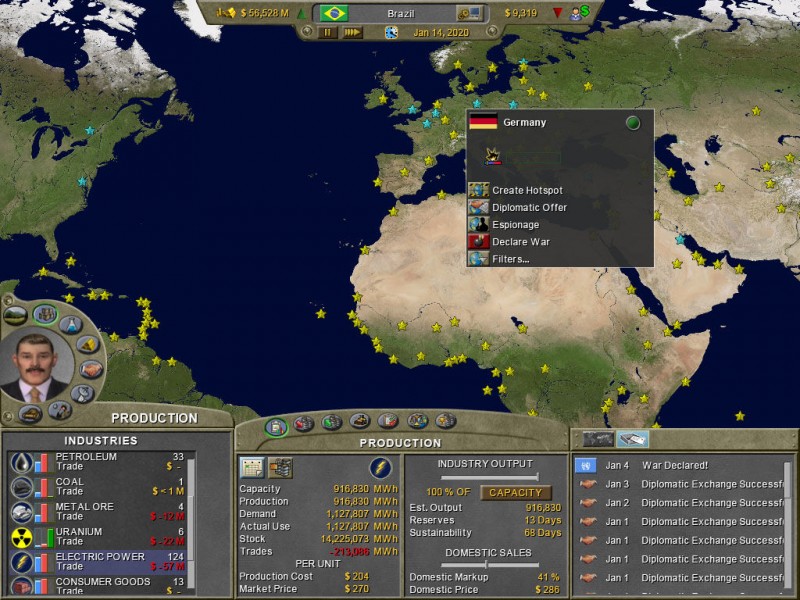 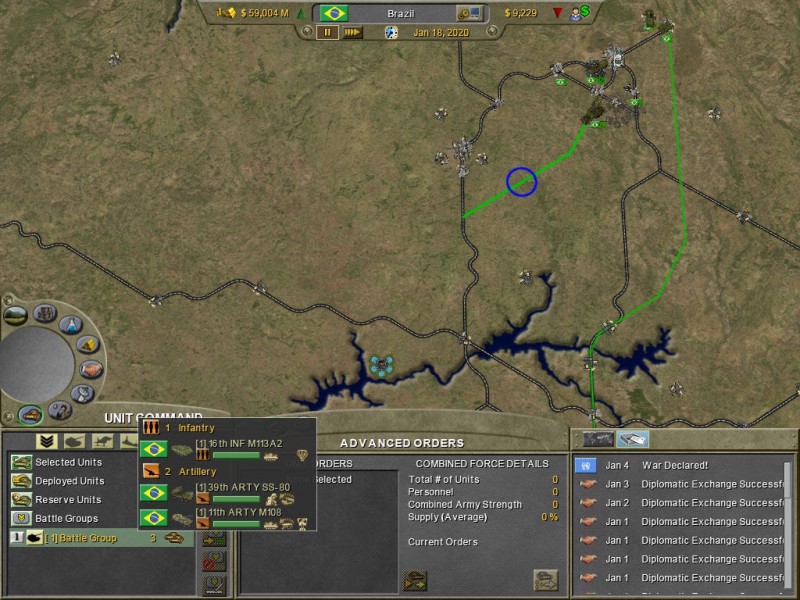 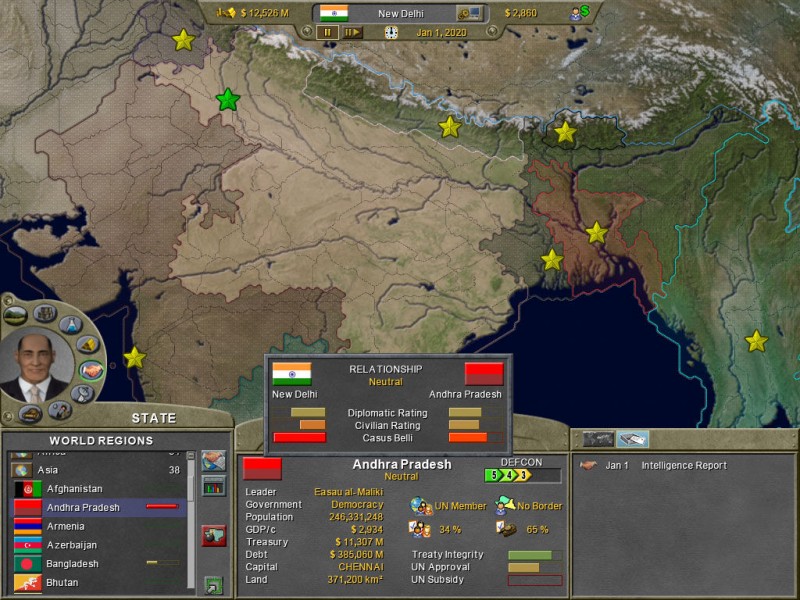 BattleGoat Studios is excited to announce that the newest release in the Supreme Ruler series is now available under Steam Early Access Beta... Be sure to check out Supreme Ruler 1936 on Steam: http://store.steampowered.com/app/244410/

Overnight, the US dollar crashes AND the sound echoes across the globe. The economic crisis amplifies global instabilities and regional disputes, tearing the world asunder. Nations dissolve, economies collapse, and tensions escalate. Anarchy reigns supreme. The world needs a leader. At last, your time has come.
Key features:

At the core of the expansion pack a whole new sandbox style campaign paints a new and far more intricate portrayal of the world of 2020 based on many of the ominous events from recent real-world headlines. The possibilities to change the underlying storyline for new play experiences are limitless.
Key Features: