Gun Metal is a futuristic action-packed experience where you take control of the fully transformable prototype combat vehicle known as the Havoc Suit.The Havoc Suit, a prototype combat vehicle, remains the only hope to save civilization from a tireless enemy. Standing 10 meters tall, with an arsenal of devastating weaponry and the ability to transform instantly into an agile jet, only this formidable battle machine has the potential to halt the invaders!Use the Havoc Suit to battle-ground-based enemies, or transform in the blink of an eye into an agile jet and take on aircraft in high-speed dogfights. Either way, get ready for mind-blowing action and out-of-this world graphics.Key Features:Fight hordes of enemies through 14 incredible missionsScorch the earth, crush rocks under foot, fell treesTear chunks out of towering buildings and raze entire settlements to the ground!Tool-up with an extensive armoury of devastating weaponry.

Venice was at the peak of its power during the Renaissance and was viewed as a city of decadence, beauty and intrigue. Renowned as the linchpin of civilization and the cultural centre of Europe, Venice was the most important trading post between Western Europe and the eastern stretch of the Mediterranean Sea. It was also the stage for political corruptions and clandestine dealings. This is where your story begins. As a young man striving for success, power and wealth and with the support of your family, you begin to build up a trading empire across Genua, Tripoli, Rome, Alexandria and Constantinople in addition to many other significant cities from the Renaissance. As you progress through the ranks of Venetian society, increasing your power with smart trading moves and calling in the occasional favour you can begin to assemble your own fleet. With this you will start to build up new production facilities, test yourself in challenging sea battles where you will face off against pirates as well as political enemies to finally become the Doge of Venice.Key Features:Experience a compelling story full of intrigue and treason in Venice at the time of the RenaissanceTrade a variety of goods in the most important cities of the time such as Rome, Alexandria, Constantinople or Athens.With your own family tree you can interact with your family members, send them on missions and watch how the power of your family grows over time.Meet other important families who are pulling the strings in Venice’s government and influence political decisions yourself.Build your own production facilities and trading fleetsTake fate into your own hands and test your skills in furious sea battles Multiplayer mode for up to 4 players via LAN and Internet 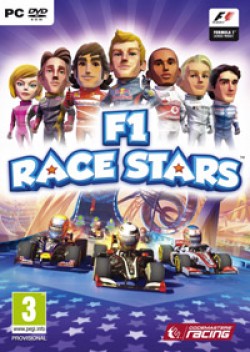 F1 RACE STARS™ is a brand new world of FORMULA ONE™ fun as you’ve never seen it before! Officially licensed to feature all of your favorite FORMULA ONE stars and teams, get ready to sprint for the checkered flag on famous circuits transformed to feature jumps, loop-the-loops and shortcuts and use a cool range of awesome power-ups to overtake your rivals.Travel the world and enter a wide range of different Championships in career mode and set your fastest lap in Time Trials. Then it’s time to share the fun with friends and family - accessible controls make F1 RACE STARS perfect for split-screen racing with up to four players or dive into 12 player online races and take on the world. F1 RACE STARS - get fast to the fun!Key Features
Officially licensed to feature all of your favorite FORMULA ONE cars and teams
Features accessible controls for wheel-to-wheel competition
Experience FORMULA ONE circuits like never before – speed through loop-the-loops, shortcuts, jumps and more!
Collect and use crazy power-ups to overtake your rivals
Share the fun with friends and family with four player split-screen, and play in split-screen against other players online
Travel the world and enter a range of Championships in career mode
Race online with up to twelve players
Connect F1 RACE STARS to Codemasters’ free online hub RaceNet to track your races, rewards and rivals and enter community events!
Set your fastest lap and climb leaderboards in Time Trials The Book of Unwritten Tales 2

The Critter Chronicles tell the story of how adventurer Nate Bonnett and Critter, his hairy sidekick, first met, all set before their appearance in Wilbur’s and Ivo’s adventure in The Book of Unwritten Tales. Enjoy a thrilling and hilarious point-and-click adventure in the fantasy world of Aventasia. Travel from the Northlands to the Mage’s Tower of Seastone and experience a story that offers tremendous fun for seasoned players of “The Book of Unwritten Tales” and newcomers alike.